A visit to the allotment!

A charity in Leicester recently enjoyed an afternoon out at an allotment run by an asylum seeker from Zimbabwe. 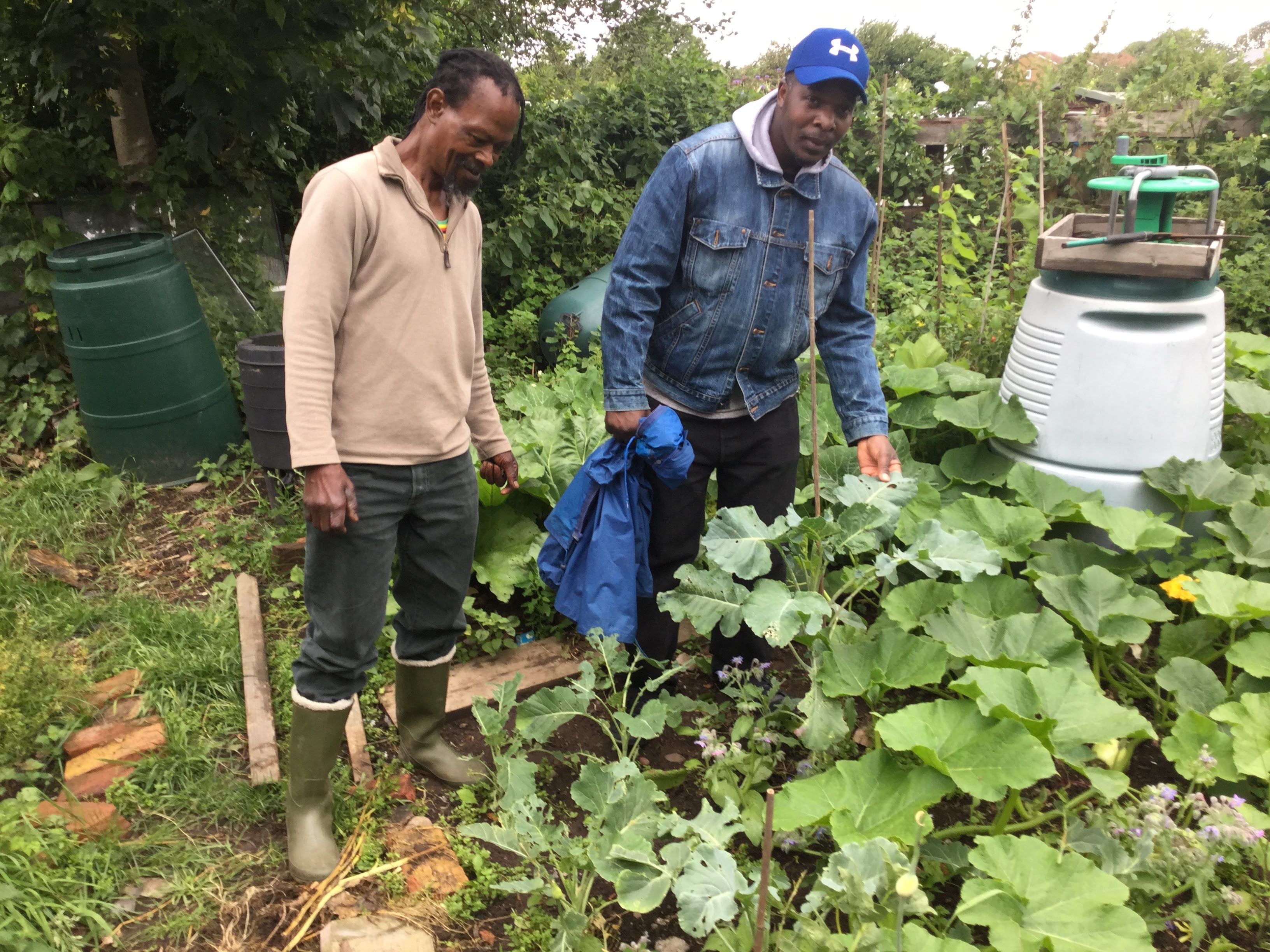 A group of 24 including 7 children, asylum seekers and refugees from Leicester City of Sanctuary (LCoS), were shown around an allotment of assorted vegetables and fruits grown by Joel Chitsa on 31st July 2019.

Shali Bullough, Coordinator of LCoS, who led the visit was very happy and had the following sentiments,

“LCoS provides Joel with a small grant to contribute towards the costs of the allotment and he has been bringing fresh, organic vegetables to our drop-in for several years. It was wonderful to have the opportunity to see where these vegetables come from and how they are grown,” she said.

The visit to the allotment was also blessed by Samantha Woods from The Conservation Volunteers (TCV), who helped to organise the trip. The visit was part of a wider project called ‘Get Growing’, which aimed to provide the asylum seekers and refugees at the Leicester City of Sanctuary drop-in with an introduction to food growing. In this joint project between LCoS and TCV, Samantha also ran a seed planting activity at the LCoS drop-in in March, in which 50 people, including many toddlers, took part, taking the pot home to look after. One man grew an enormous pumpkin plant in his garden as a result. This was followed by a potting-on activity in June when a group of 27, both adults and children, planted a flower or herb in a pot. One young mum revealed that unfortunately her plant didn’t fare too well at home, as her little boy decided to give it a ‘hair cut’, lopping off the top with a pair of nail scissors!

These activities allowed people to touch and feel seeds and compost and young plants, and have a go at growing

something themselves. They were also able to share their own stories of growing in their countries of origin, and gain confidence in growing food plants in the UK.

Mr Joel Chitsa has run the allotment since 2011.  When asked how many vegetables or the number of people he provides for during each LCoS drop-in session, Joel, a vegan, quickly responded with a smile by saying, “I wouldn’t want to give a figure nor am I really interested in numbers. All that I know is that it is enough for all those interested to get some organic vegetables each week”.

Joel Chitsa, now a self-developed professional gardener, went on to explain to his visitors how he maintains his vast allotment of vegetables as well as fruits. He talked and showed his guests the different types of vegetables and even allowed them to taste some black and blue berries, some plums and gooseberries. They also had an opportunity of taking some vegetables of their choice home. He also acknowledged nature’s role when birds share his produce and at the same time leave their droppings as very good manure.

As well as a guided tour of the allotment, the group also enjoyed a picnic and sampled cooked pumpkin leaves made from some of the plants Joel had grown. This is a traditional dish from Zimbabwe and was prepared by one of the ladies in our group who remembered cooking it back home.

Greatly appreciating what she saw, one visitor had this to say, “this is a well-managed garden

and has a lot of plants, from vegetables of a variety types to fruit trees. We enjoyed various fruits and had a cooked vegetable dish from pumpkin leaves. On our departure, we were given some leaf vegetables of our choice to carry home.”

Mr Chitsa outlined many benefits of gardening such as getting more exercise, enjoying the outdoors, meeting new people, reducing stress, sharing and gaining knowledge from others, and above all, being able to grow one’s own food.

Shali added great appreciation to Joel on behalf of all those who attended. “We had a brilliant afternoon at Joel’s allotment, learning about allotment gardening, and the incredibly hard work that Joel puts into maintaining these plots. The kids loved the opportunity to taste the various berries and enjoyed an afternoon of freedom, running around in the fresh air and planting some cuttings.” 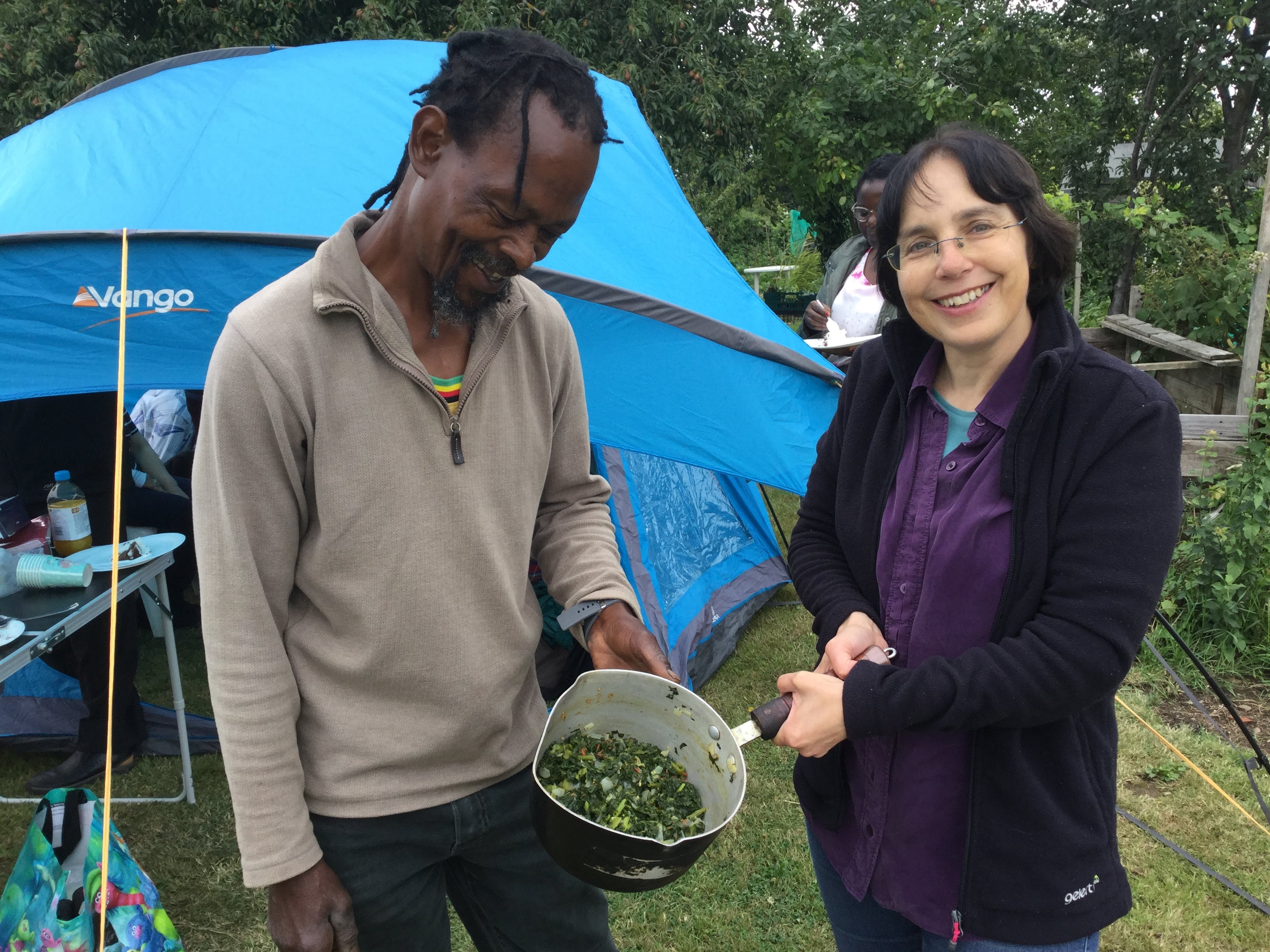 ‘We really enjoyed it with the kids’. Another mum added ‘We had an excellent experience at the allotment, and we learned to grow different types of vegetables from all around the world. Thank you for taking us there’.

After a through sightseeing tour and listening to Joel’s explanations on how he works on the allotment, Shali summed it up by thanking him.

“We now understand a great deal more about where our vegetables come from, how they are grown, and what an expert gardener Joel is to harvest so much from his plot. I thank you Joel for having us and giving us such an interesting afternoon,” she said.

In conclusion when Joel was asked on how he felt being visited by such a group and if he has any message he can pass to others with regards to what he’s doing at the allotment, he responded emotionally by acknowledging that it was wonderful, and it inspired him as well as motivates him to work even harder.

“I enjoyed that people came to see the garden and I hope it influenced many people. It also inspires me to know that people value plants. I have gone a long way considering my age,” he said. Some people may wonder how I come to this age. I am over 60 years now and this is all about being a vegan. I do encourage people to grow their own stuff.”

4 Responses to “A visit to the allotment!”