Leicester City of Sanctuary now chairs the Leicester Multi-Agency Forum where issues around refugee protection and integration are discussed. As well as running essential direct services for refugees and asylum seekers, our drop-in centre has become a local Hub for other agencies in city to engage with our community. We are pleased to be able to provide a place where this can happen and build partnerships with other local organisations in order to extend the services available to our people. Chairing the MAF puts us in a good position to do this.

The February MAF meeting was the busiest we’ve had in a long time, with 16 agencies and 21 people in the room. The New Futures Project (https://new-futures.org.uk/) are a new attendee to the meeting, supporting women and young people who have been sexually exploited. Services provided by the New Futures Project are absolutely critical to allowing refugees and asylum seekers the best possible chance at a fresh start when they enter the UK.

Some of the most important discussion at the February meeting revolved around ESOL provision in Leicester, with Leicester university highlighting the courses offered and sparking discussion as to how other agencies offering language tuition complimented one another.

As well as that DMU and UoL discussed their plans for Refugee Week, and their frustration that often by the time it’s usually held in June, students are often fully engaged with exams and unable to participate as much as they’d like to. As an experiment, Leicester will be holding their refugee week at the beginning of March this year, so if you’re able to support, please do pop along!

Please click HERE to see the programme of events

In early January we joined forces with Leicester City in the Community (LCitC)  and local charity After 18 to attend the Amnesty International’s Midlands Conference in Birmingham. Service users from both LCoS and After 18 spoke to a workshop at the conference about the Football Welcomes Refugees project that is supported by Amnesty and run in partnership with LCitC. As part of the Football Welcomes Refugees project, LCitC support our Saturday football session, and also send Sarah Jones to the drop-in at our Hub each week to run the Soccercise exercise session and other activities. Thanks to Sarah we are improving both our general fitness and our ball skills!

The Joe Humphries Memorial Trust recently give us life-saving training on CPR and the use of a defibrillator. 20 service users took part, and everyone agreed that it was an essential thing for people to know in order to keep each other safe.

We had a visit and craft activity run by Linda Harding from Museums Services on 22nd Jan, followed by a trip to New Walk Museum to see the Sanctuary Wall. Many people at the drop-in had made birds with Linda which were incorporated into the collage on the wall. Fourteen people came on the trip, most of whom had not been to New Walk Museum before. In addition to visiting the Sanctuary wall, we also had a guided tour of the different galleries and were treated to drinks, cakes and biscuits in a private room afterwards.

In February researchers from Leicester University came in to do blood tests to find out about immunity to certain communicable diseases in the migrant population. This is part of a research project being led by Dr Manish Pareek, Clinical Professor at UoL. The team was overwhelmed with the response from our people – 21 took part, giving blood samples for the research project.

We also had a recent visit from Climate Action Leicester and Leicestershire (CALL) who are encouraging people to take part in a City Council consultation exercise about changes that will have to be made in how we live in Leicester. CALL want to ensure that this consultation is as diverse as possible and particularly that it reflects the views of groups who may have personal experience of the effects of global warming in the global South, such as drought, famine, floods etc. They engaged with about 20 people at the drop-in and got a great response, with various suggestions that were not in the council proposals.

We catered for over 30 children with their parents at half term. We were lucky to have been offered a great selection of Lego from one of our supporters, and this donated Lego was a big success with the older children, keeping them occupied throughout the session.

We had a generous donation and cheque presentation at our Drop-in from Santo Nino Leicester and Bayanihan Leicestershire, whilst Christ the King Primary School recently held a sponsored sleepover in their hall to raise funds for us.
Thanks to all who took part in these events, we will put the money raised to good use.

It’s been a very busy start to the year at our Hub, and with spring approaching, we hope to be getting out and about, taking advantage of the better weather.

And just to wrap it up, here’s an image of the Sanctuary Wall down at the New Walk Museum, an art piece worked on by refugees and asylum seekers to express ideas of hope and freedom. 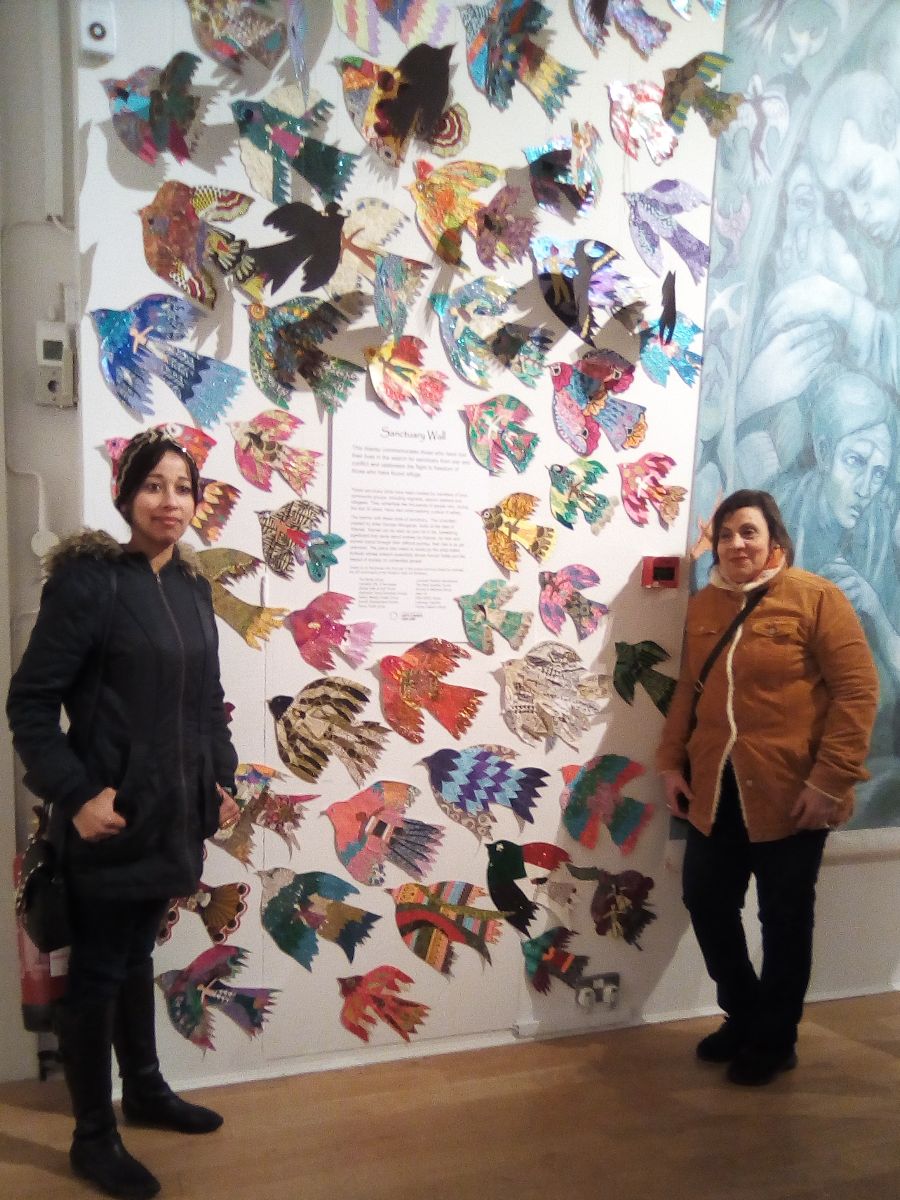